Once again, I'm late with reflecting on last month's goals and setting out this month's goals.  Perhaps my goal for this month should be to be on time with my next post about goals?

Anyway...for March, I made a very vague commitment to "recognize what I need and to meet those needs".  I was feeling in a bit of a slump at the time, and I couldn't quite figure out what would make me feel better, so my goal was essentially an attempt to identify anything that would make me feel better and do it.  After a few days of self reflection, I realized that one of my biggest sources of unhappiness was feeling like I was spending all of my time doing the tedious parts of my job (dictating, editing dictations, reviewing labs) without ever being finished with it.  In response to this, I made it my priority to get all the stuff done, and I did.  (As I wrote about here).

In getting caught up on my work, and even more so in trying to prevent the work from reaccumulating, I have come to realize that I was making the fatal mistake of letting my work expand to fill the time available to me.  I'm usually in clinic only about 50% of the time, leaving me with more than enough time for office work when I'm not on call, and I was allowing the tedious work to unnecessarily fill up all of my non-clinic time.  I would come in a bit late, have a nice long coffee break, check Facebook, and do all kinds of things to procrastinate getting the work done because there wasn't a real urgency to doing it.  When I had another project to work on, such as a presentation with a firm deadline, then I would get more efficient at the tedious work to make time for the other project, but otherwise I was dawdling.  And feeling trapped in paperwork hell.

Forcing myself to finish my tedious work on a daily basis (as much as possible) has made me much more efficient.  I come in on time, I minimize non-work activities, and I use even the random five- or ten-minute chunks of available time between events to be productive.  There is absolutely no way that I want to stay later than I need to because I've been scrolling through Facebook instead of signing off on dictations.  By making much better use of my time, I've finally freed up some of the big chunks of time that I need for bigger projects.  Which feels awesome.

So, March goal?  Let's call it a success.

A lot of my time with patients is spent counseling them on living a healthy lifestyle.  Many of them hope that I hold a magical secret to living better, but in reality, my advice to them is always pretty basic:  Get exercise (30 minutes per time, 3-5 times per week).  Eat more healthy food (fruits, vegetables, lower-fat dairy, lower-fat meat/meat alternatives, whole-grain products).  Eat less unhealthy food (pop, chips, fast food, processed food, sugar).  Simple in theory, frustratingly difficult in practice.

After spending my days giving (what I think is) fundamentally sound advice, I unfortunately often go home and sit on my couch eating precisely the things I tell my patients not to.  I love pop.  And chocolate.  And ice cream.  And eating out in almost any restaurant, including the greasiest of greasy spoons.  I am an extraordinary hypocrite, and I know it's something I need to work on.

About a week ago, my girlfriend and I watched an excellent documentary featuring Michael Pollan, an author who has written books about the problems with the industrial food system and with our current approach to eating healthily.  The documentary focuses around Pollan's simple advice on how to eat: 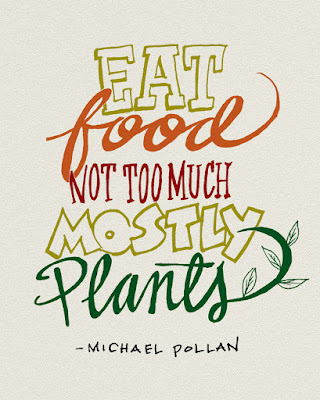 As I was watching the documentary, I was struck by how simple the advice was, and by how horribly I fail to live up to it.  Even though I actually like real, unprocessed, healthy foods.  The main reason I eat so much bad food is laziness and accessibility, both of which I can change.  So...I'm making two commitments for the months that fall under the heading of "Eat Food".

1)  No pop.  It's something I don't need, and it's one of the worst things I can possibly consume.  So for this month (if not longer), I'm done with it.

2)  Take one fruit and one vegetable in my lunch every day.  It's a small start, but it is at least a start.  I bought an assortment of vegetables at the grocery store today, I've cut up a bunch of vegetables to take in my lunches, and I'm ready to be successful at this one.

Now I'm off to Red Lobster for dinner.  I wonder if they sell any real food....
Posted by Solitary Diner (Also Known as The Frugalish Physician) at 6:05 PM 4 comments:

Tonight I went to a talk about climate change by Naomi Klein, a Canadian writer and activist.  Going into it, I was worried that it was going to be a depressing lecture about how the Earth is doomed, complete with photos of polar bears floating adrift on melting icebergs. 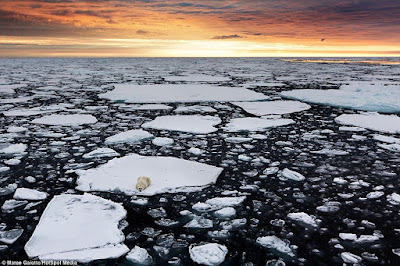 Instead, the talk was a call for transformation - from fossil fuel to renewable energy, from a profit-driven economy to a human-centred society, from isolation to community.  It was 90 minutes of a left-wing, granola crunchy vision for humanity*, and I loved it.  Her talk encompassed everything I believe about how the world should strive to operate, only articulated in a vastly more intelligent and entertaining way than I ever could.

As I listened, I was hopeful that the world might just be capable of realizing the things I believe in:  environmental sustainability, racial/gender/sexual equality, empowerment of the poor and the marginalized.  And I wondered, what is my role in this?  As a physician (and as a queer, able-bodied, white, upper class woman), how do I live out my values and contribute to the society that I want to see?  How do I move beyond earning a paycheque and paying off debt to making a lasting change in my community?

I don't quite know yet, nor do I have the energy to really delve into this question late on a Friday night, but it is definitely something to think about.  Any ideas?

*Supported by a very solid research base and understanding of economics/politics/world systems.
Posted by Solitary Diner (Also Known as The Frugalish Physician) at 10:31 PM 3 comments:

Email ThisBlogThis!Share to TwitterShare to FacebookShare to Pinterest
Labels: Getting on my Soapbox, My (Usually Unsuccessful) Attempts to be Profound

Years ago, soon after I had started medical school, a friend of mine who is a physician came in from out of town for a visit.  During his stay, I inundated him with questions about medicine and work life balance and time off for physicians.  When the subject of vacation came up, I was quite surprised to hear that he could take almost as much time off as he wanted to, but he didn't.  It was, he said, too hard to give up the money.

At the time, I didn't understand.  I viewed vacation as a wonderful time of happiness and freedom, and I couldn't imagine passing it up for more money when doctors already make lots of money.

Fast forward eight or nine years, and I understand completely.  When the amount you earn is directly proportional to the amount you work, and especially when you still have 5-10 years of debt repayment ahead of you, it's really hard to justify time off from work.  Every day off is a calculation:

It's so easy to look at that calculation and think that I don't need a vacation and that it's okay for me to miss out on the things that make me happy.  Except that I do.  And it isn't.

So I'm learning to value my time more than my income.  It started today, with cancelling a half day clinic so that I can go to a really interesting conference on work life balance.  And then, emboldened by that decision, I decided to take an entire week off during our local theatre festival.  A week!  It took me hours to commit to the decision, but now that I've made it, it feels right.  It feels entirely right for me to make time for something that I love that gives me joy.

After all, why else am I here?
Posted by Solitary Diner (Also Known as The Frugalish Physician) at 9:50 PM 10 comments: