Learning About Love from Mary Oliver

For almost all of my dating life, I have struggled to make failing relationships work.  The queer community in my city is small, so I've tried to convince myself over and over that I can make do with someone who is too loud/too messy/not interesting enough in order to have a partner.  The worst of this was with my second-last ex, whose many good features made me want to overlook the bad, resulting in four years of settling for not quite enough.

Towards the end of that relationship, I started seeking solace in literature.  I would Google phrases like "poems about hating your girlfriend" and "poems to help me stay in a relationship when I'm unhappy" and then spend hours scrolling through the results.  Somewhere in the midst of this, I stumbled upon Mary Oliver's "Wild Geese", which in my opinion is one of the best things ever written. 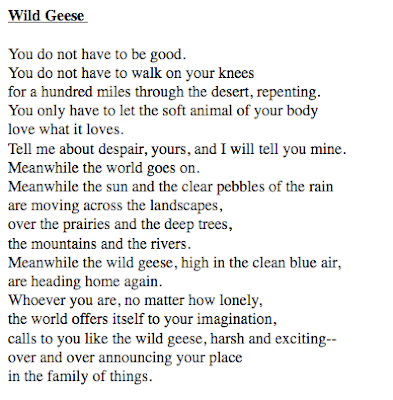 The whole poem is fabulous, but what stood out for me was the line "You only have to let the soft animal of your body love what it loves."  The line stuck with me for days, forcing me to realize that the soft animal of my body did not love my partner, no matter how hard I tried to will it to.  I'm sure I would have broken up with my ex eventually even without it, but that single line was the thing that finally allowed me to walk away.

As I get back into dating after the end of my long relationship, I carry these words with me.  They remind me that love isn't something that can be forced or willed.  I can't change myself to be loved by someone else, nor can I ignore parts of another person in order to love them.  The soft animal of my body is a highly discerning tyrant, and she is in charge.
Posted by Solitary Diner (Also Known as The Frugalish Physician) at 8:48 AM 14 comments:

She Will Be Okay

The first four weeks of my most recent relationship passed in a strange and magical sort of delirium.  Perhaps I have always felt this way at the beginning of a relationship and had simply forgotten, but it seemed more intense and all-consuming than any relationship I'd ever been in.  When we weren't together, we texted constantly, and when not texting, I still thought about her all the time.  It was utterly distracting in the most wonderful of ways.

And then, something shifted.

I can't pinpoint the moment or the reason, but suddenly my interest waned.  I waited longer to respond to texts, and I wanted to see her less often.  It became easier to say goodnight at the end of a date.  Without any real warning, I was done.

So Saturday evening, I broke up with her.

It was a horribly difficult thing for me to do, because I hate hurting people.  In the past, I have stayed in relationships way too long (weeks to months to years too long) out of a desire to not hurt the other person.  While we had only been together seven weeks, we had made plans months into the future, and I felt like an ass for being the one to say that those things weren't going to happen.

I spent most of Saturday agonizing over breaking up with her, even though I had no real doubt that it was the right thing to do.  I contemplated waiting, "giving it a bit more time", because I was dreading the moment of the breakup.  I texted all my close friends, trying their patience with hours of rapid cycling between "I'm going to break up with her tonight" and "I'm going to wait a little longer".  I was unbearable.

And then I saw a Facebook post from an ex of mine from years ago.  She had fallen apart when I broke up with her, crying and sending me angry texts for weeks.  The Facebook post was a picture of her, 20 weeks pregnant, with her wife.  It is completely cliché to say this, but the only way to describe her expression is "glowing".

And then it was easy.  Because while breakups are messy and hurtful and absolutely zero fun, people do survive them.  And hopefully there are better things waiting for all of us on the other side.
Posted by Solitary Diner (Also Known as The Frugalish Physician) at 6:01 PM 12 comments: