Earlier this week, the girlfriend and I were watching a documentary about people who are transgendered, and we got to discussing whether either of us had ever wanted to be male.  While neither of us has ever felt any particular desire to be a man, we both recognized that being part of the opposite sex would bring a few advantages.  For me, I would love to never, ever again be mistaken for a nurse.  Not having periods would be awesome.  And today, as I was wriggling into and out of ill-fitting work clothes at the mall, I was reminded of how much easier men have it when it comes to clothing.

Men's work clothes are simple:  dress pants, dress shirt, tie (if a bit formal), and jacket (if more formal).  Done.  My male colleagues can spend 20 minutes in a store and walk out with enough clothing for a year.

Not so much for women.

Instead of a classic suit that fits everyone, women get to contend with multiple styles of pants, skirts, and dresses, none of which seem to have been designed to look good on a real live woman who actually consumes food.  And then there are the ridiculous tops, which are one or more of too see-through, too low-cut, too gaudy, or too difficult and time-consuming to wash to be worn in a professional setting.  Seriously - what resident wants to spend their limited time off hand washing their work clothes?

Can we just agree to let all doctors wear scrubs?
Posted by Solitary Diner (Also Known as The Frugalish Physician) at 7:14 PM 1 comment:

I know from almost 38 years of living as myself that I don't enjoy being overly busy.  I can handle a lot of busy - I've survived four years of medical school and five years of residency - but my preference is always for a slower, more manageable pace.  Which is why it was idiotic of me to 1) arrive home after being away for five weeks at 8 PM the night before I had to go back to work; 2) agree to do call the weekend after I returned; and 3) agree to adjudicate an exam all Saturday while also on call.  Add to this the fact that I have three presentations to give over three weeks, and life has been too busy lately.  And I've been a miserable grouch of a person as I've struggled to do too many things in too little time.

All of these things could've been avoided.  I could've (and should've) taken a stat day off after returning from holidays to unpack the car and wash the massive amounts of laundry.  I could've switched my weekend of call.  I could've said that, no, it isn't worth giving up a weekend day to earn a little bit of money when I'll be a full-blown attending in a few months.  But I'm an idiot.

I need to remember this when I start working as an attending this summer.  I need to remember that I need sleep, and time to clean my apartment, and quality time with my girlfriend.  And all of these things are more important than earning a bit more money, no matter how big my line of credit may still be*.

Remind me of this when I'm tempted to say yes to an extra weekend of attending call.

*I've got a post brewing about the massive line of credit from hell.  Stay tuned.
Posted by Solitary Diner (Also Known as The Frugalish Physician) at 8:13 PM 2 comments:

Email ThisBlogThis!Share to TwitterShare to FacebookShare to Pinterest
Labels: Figuring out my Priorities, Overwhelmed, Tired

The past month has been a difficult one.  I've been away from home on an elective rotation, meaning that, not only have I been dealing with the stress of a new place, new people, and new medicine, I've been doing so without the benefit of my usual support people.  Although the work has been interesting and the medical staff very supportive of me, it has felt like a very long and hard month.

Thankfully, the end of the month brought with it a conference in the Rocky Mountains, which is pretty much my favourite place in the world.  The girlfriend was able to join me for the conference, so she had a few days to enjoy Banff while I listened to talks and shmoozed with other physicians.  And now that the conference is over, we have six days (four left) to explore Japser and to visit some family in rural Canada.

The drive from Banff to Jasper was absolutely spectacular.  I've done the drive at least seven times now, and it never ceases to amaze me.  Every time I make the drive, I pull over multiple times to take the same photos that I've taken before, because I can't resist the views. 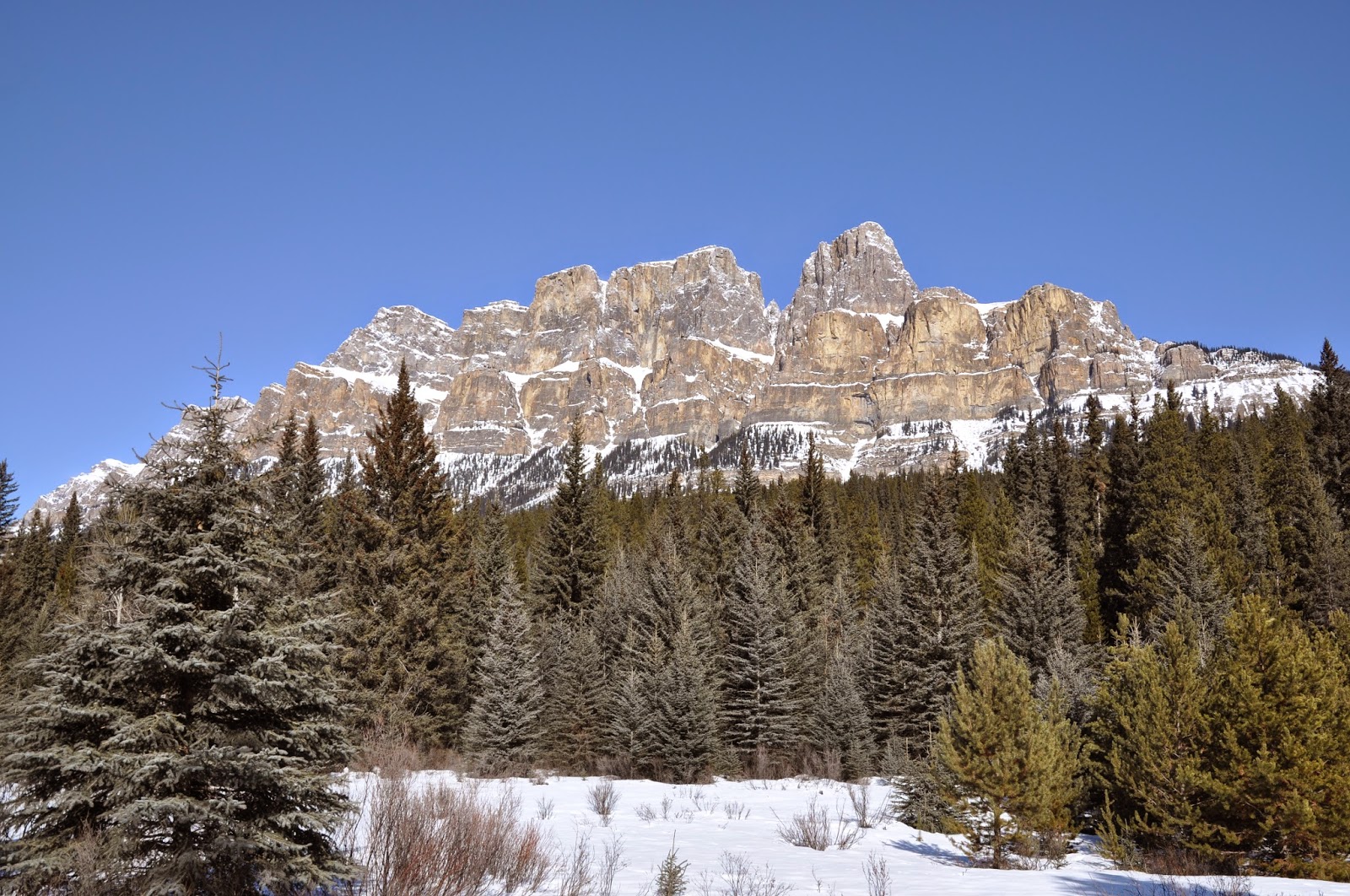 One of many photos I've taken of Castle Mountain from the same viewpoint.
I also have this photo in summer!  And fall!

Since our arrival in Jasper, we've been doing a lot of relaxing and a lot of eating.  We tried unsuccessfully to go on hikes to Mount Edith Cavell (road closed for winter) and Maligne Canyon (paths were deadly skating rinks due to recent melting), and then resigned ourselves to staring at the mountains through our hotel window while lounging in front of the fireplace.  It's a hard life. 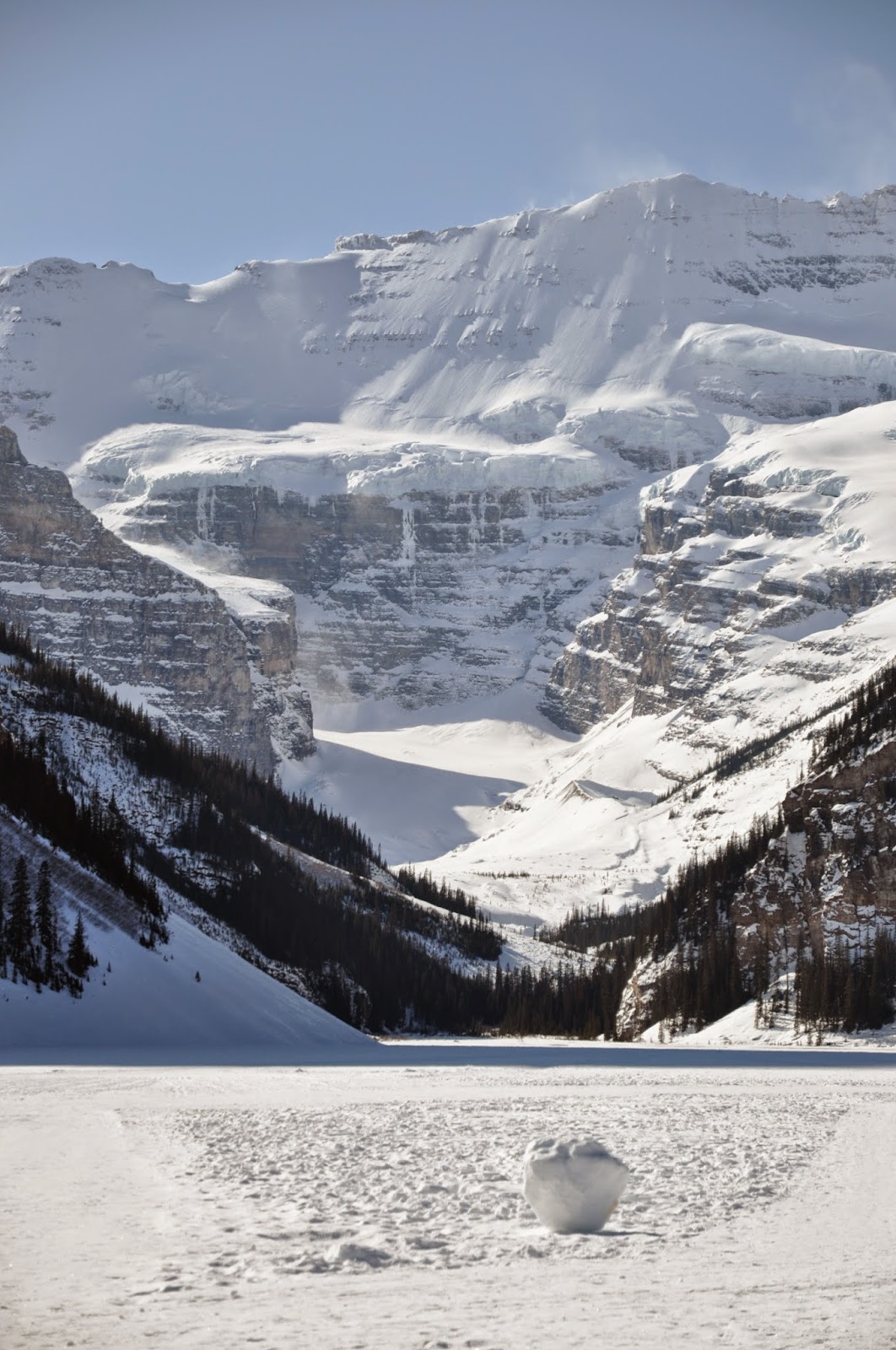 The glacier at Lake Louise. 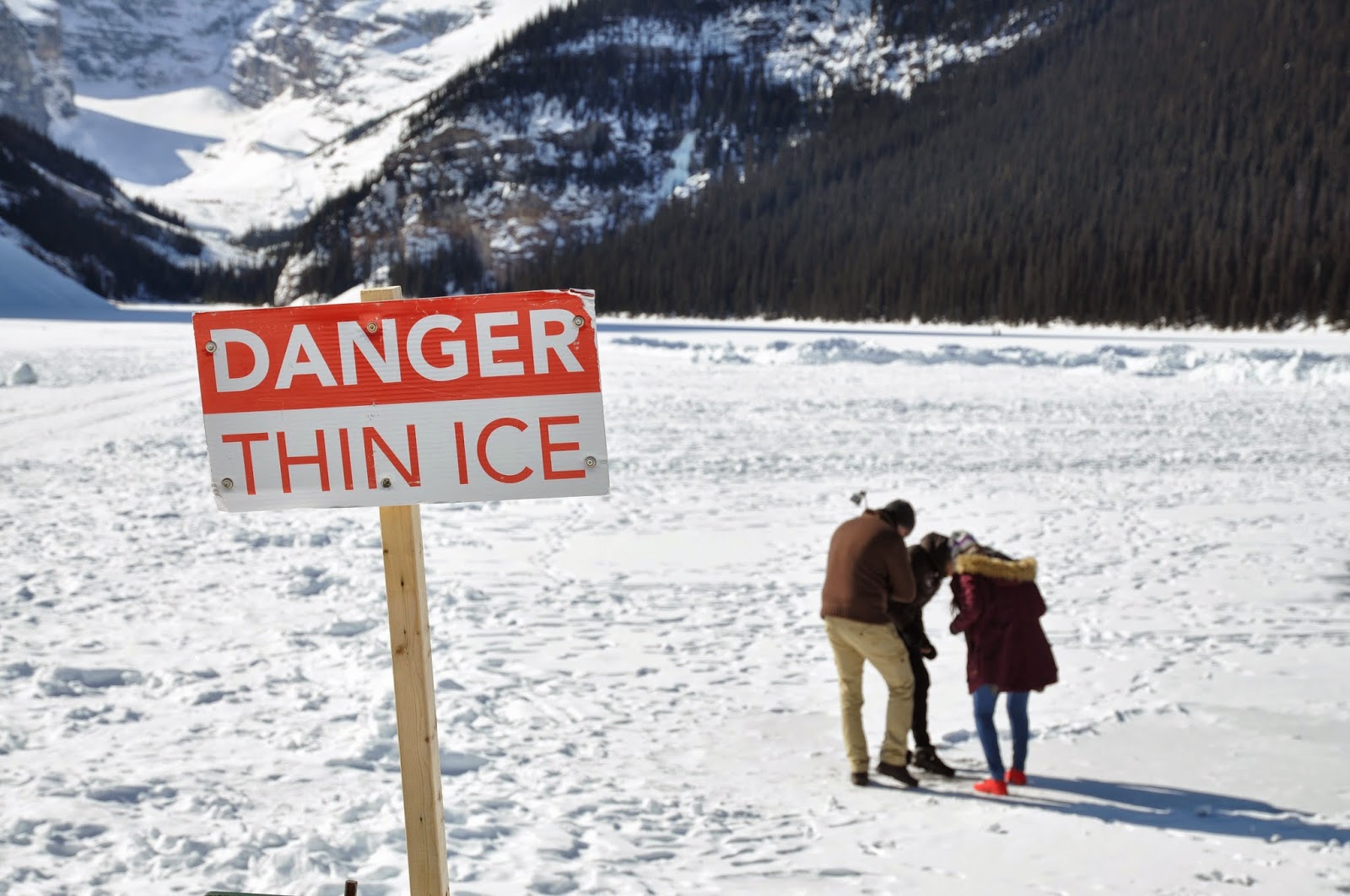 People who have trouble following signs. 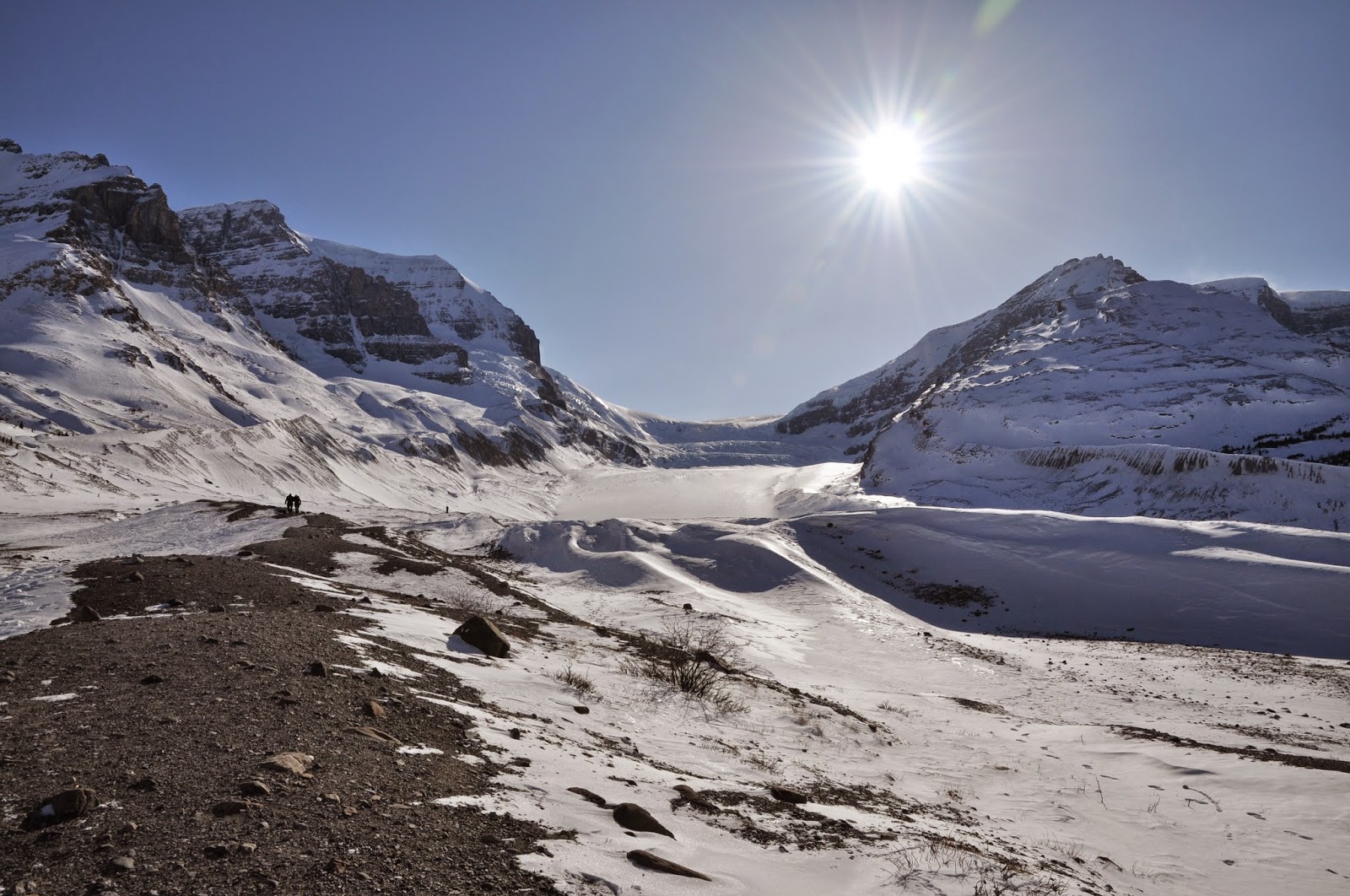 The breathtaking Columbia Icefields.
Someday I'll have time to actually take a tour out onto the glacier.
Posted by Solitary Diner (Also Known as The Frugalish Physician) at 12:59 PM 2 comments:

Email ThisBlogThis!Share to TwitterShare to FacebookShare to Pinterest
Labels: Mountains, Quality time with the Girlfriend, Vacation

Who Are You Reading?

It seems like there has been a big decrease in both the number of medical people blogging and the frequency with which they're posting. Which I understand (Medicine! Life! Busy!), but still find disappointing, as I love to hear other people's thoughts on this crazy field in which I work. So help me out - leave me a comment to let me know which medical blogs you're reading that I might have missed.  And if you're a blog writer (even better), let me know that too!

Real posts to come soon. I have six days of vacation starting on Tuesday, so hopefully I'll have some time to share some of the many thoughts that have been swirling around in my head (and sometimes preventing me from sleeping) as of late.
Posted by Solitary Diner (Also Known as The Frugalish Physician) at 10:33 AM 8 comments: