Although I did a tremendous amount of thinking about my trip before leaving Canada, I had made almost no firm commitments* prior to the trip.  I know myself, and I know that my energy level and interests vary widely from day to day, so I tend to build a lot of flexibility into my travel schedule whenever possible.  Yesterday, however, I realized that I was going to need something to motivate me to get my jet lagged ass out of bed this morning, so I wisely booked myself for a 10 am walking tour.

After forcing my sleepy body to stay awake until 10:30 last night, I was wide awake at 3 am this morning.  It took me almost 2 hours of thinking about Twitter, blog posts, my travel plans, and all the ills in the world before I finally fell back asleep, but by the time my alarm went off at 7:45 am, I had reentered a sleep so deep that I felt ill on waking. If I hadn't booked the tour and made plans for breakfast, I don't know when I would've dragged myself out of bed.

But drag myself out I did, and I was early enough for my tour to be able to start my day with the best pain au chocolat I've ever eaten**.  Followed by an awesome café (French for coffee...not the whole café).  And then at 10 am, I went on a tour of Le Vieux Lyon (Old Lyon) with a group of about 20 other people. 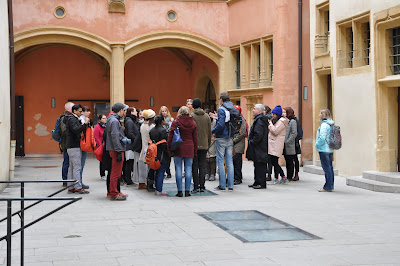 We saw the cathedral, les traboules (pass-throughs), lots of old buildings, and one of the rivers.  (Either le Rhône or le Saône.  I am incapable of reading maps.  But it was a really pretty river.) 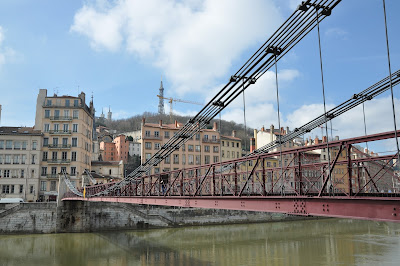 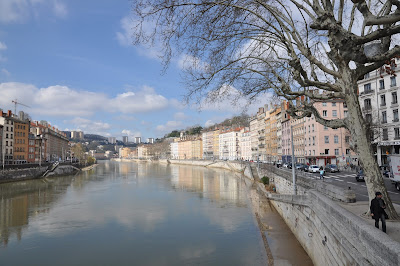 I learned that Marie Antoinette actually said "Let them eat brioche" (or more accurately, "Qu'ils mangent de la brioche") and not "Let them eat cake".  I also learned that many of the Catholic monuments of Lyon were damaged by Protestants after the Reformation, like this random statue in one of the streets. 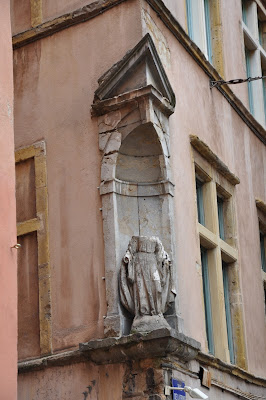 And I learned that the word fascism comes from the word fascio, meaning a bundle of rods.  Fascio were originally a symbol of the strength that comes from unity, as a single rod is easily broken, while a bundle of rods is not.  Sadly, this beautiful imagery was co-opted by Mussolini, and now depictions of fascio are frowned on.  Bloody fascists ruin everything. 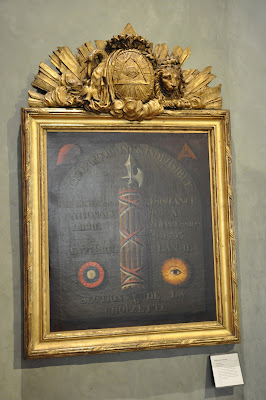 After the really good walking tour ended, I went to a bouchon that was recommended by the tour guide, where I ate the best piece of lamb I have ever eaten.  Followed by a pretty amazing dessert.  It was so much food that I literally didn't feel the slightest bit hungry for another six and a half hours.  I had planned to have a nice dinner out, including 2 Euro crèpes from a nearby crèpe stand, but I barely managed to eat a bit of cheese and bread.  I probably would have skipped dinner entirely if I hadn't been afraid of waking up ravenous at 3 am.

In the afternoon, I continued to nerd by going to the city's historical museum.  It was interesting to see the local perspective on major events from France's history, but I timed my visit very poorly.  I spent hours photographing the remains of old churches and scales from the city's history as a trading post, such that by the time I hit the really interesting World War I and II sections, all I wanted to do was lie down.  But with a few long sits in the museum's chairs (and possibly an upright nap), I made it to the end. 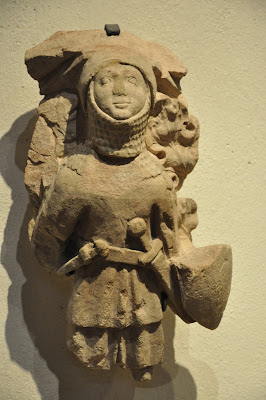 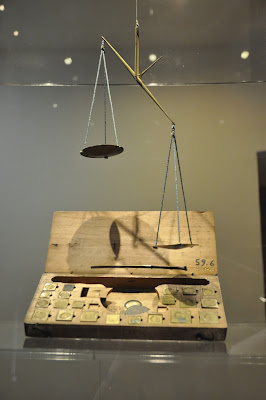 I even had enough energy for a quick visit to the adjacent puppet (marionette) museum, which is included in the ticket price. 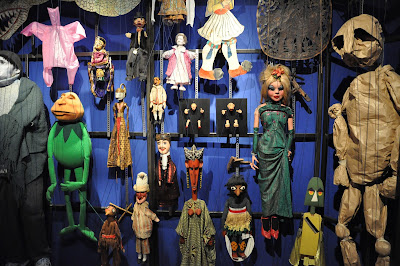 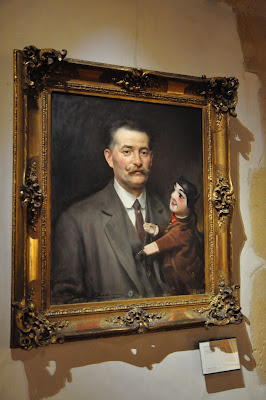 By the end of the second museum, I was done for the day.  Thanks to the city's efficient Metro system, I was back in my apartment by 7 PM, where I have been internetting and rubbing my feet ever since.

It was a really, really lovely day.

And tomorrow, there is more!  I am going on another walking tour, because I enjoyed today's so much.  I'm not entirely sure what I am going to do after...I want to visit the cathedral again, as well as go to the Basilica de Notre Dame, the prison museum, the science museum, and the resistance museum.  And I can't.  But I leave Lyon on Monday, so I will have to make choices.

Come back tomorrow night (maybe) to see what I pick!

*This is perhaps a stretch.  I booked all my Airbnbs and train tickets in advance.  But the only actual activity I had booked was a tour of the Canadian D-day beaches, because they are extremely hard to find.

**Most of my food photos are being taken on my iPhone and tweeted in real time, so if you want to see pictures of food (yes, you do), follow me on Twitter (Frugalish Physician@FrugalishMD).  I'm not being a savvy blogger in forcing you to look at Twitter for food photos; I actually have no idea how to transfer photos from my iPhone to my computer.  Yeah.
Posted by Solitary Diner (Also Known as The Frugalish Physician) at 3:42 PM 4 comments:

Email ThisBlogThis!Share to TwitterShare to FacebookShare to Pinterest
Labels: Eating as a Reason for Living, France, Lyon, The Solitary Life, Travel

Oh look...I've had another gap in my blogging for the past month.  I blame a lot of busyness from getting work tied up enough to go on vacation, a little bit of end of winter blahs, and way too much Twitter.  Thanks to those of you who have commented that you missed my blogging!  It's always good to know that I am appreciated, and I will try to do better.

Tonight may not be the night to do much better, unfortunately.  I have been awake and traveling for the better part of 30 hours, and I keep dozing off in bed.  The only reasons I'm making time for this now is that 1) I'm hoping to blog more about my trip, and I feel a need for a post that will transition me into blogging about travel, and 2) 9 PM seems a little too early to go to sleep.  So I will attempt a post.

I have been looking forward to my trip to France for months.  I started taking French lessons in preparation about 7 months ago, and in my typical fashion I have been scouring travel guides and Trip Advisor and Atlas Obscura for ideas for about as long.  I have been ready to go for weeks.

When I looked ahead to the trip, for some strange reason I anticipated that I would feel very comfortable here.  I imagined myself effortlessly reading all the signs and directions, and I could picture myself casually striking up conversations with store owners ("Pouvez-vous me recommander un très bon fromage?").  I don't know why I envisioned things this way, because I am anxious and socially awkward in my own city where I speak the language fluently, but the fantasy of language and cultural competence was strong with me.

What has happened so far has been much more in line with the person I tend to be.  While I have been navigating signage and ticket kiosks quite well, I have been pretty avoidant of actual interactions with real human beings.  I have said awkward "Bonjours!" and "Saluts!" to store owners, but I have otherwise mostly kept my head down and tried not to engage.  As much as I want to be practicing my French and taking advantage of this opportunity, my social anxiety is rearing its ugly head and keeping me quiet.

But...it's only day one.  And I am horribly exhausted and jet lagged.  I will not likely reach a point of comfort with talking to people in French before the end of this trip, but hopefully a day or two of adjustment will make me more willing to talk.  Because with a glass of good French wine, I am actually half decent with my French.

---
If you're on Twitter, please follow my adventures in France at Frugalish Physician@FrugalishMD.  (Thanks to the anonymous commenter who pointed out that I had originally entered a totally incorrect half email/half Twitter name here.  Jet lag!  Yay.)  I will be posting photos and random musings and other things there.  But I will also do my best to post some substantial posts (complete with photos) here!
Posted by Solitary Diner (Also Known as The Frugalish Physician) at 2:43 PM 8 comments: