Taking the Real World with You

When I went to Chicago for the first time in 2012, I had just finished my first month as a senior resident in a Medical-Surgical Intensive Care Unit.  That rotation was one of the most difficult months of my entire training.  My medical knowledge and patient management skills were challenged beyond anything I had ever experienced, and I lived in constant fear that my ignorance and/or incompetence was going to kill someone.  With only three residents in the unit, we were forced to take call every third night*, such that I was making difficult patient care decisions through a haze of severe sleep deprivation.

And then there were the patients.

Because the unit was home to the sickest patients in the hospital, death was a constant presence.  The worst night of my training happened in that unit:  over the course of a 15-hour overnight period, I admitted or ran a code on eight patients, not a single one of whom survived to the morning**.  At 8 am, one of my co-residents walked into the unit, looked at the near-empty patient list, and nonchalantly commented "Oh, looks like you had a quiet night".  In another situation her comment would've made me bawl, but I was too emotionally drained to do anything more than put my head on the desk and moan.  It was a hard month.

My ICU rotation was followed by two weeks of vacation, which I had initially planned to spend relaxing at home and visiting with friends and family.  But as I dragged myself through the too-long days of ICU, subsisting on digestive biscuits and ice cream cups that were intended for patients, I knew that I needed something better to look forward to in order to make it to the end of the rotation.  So, a few days before I was finished with ICU, while lying nearly immobile on my couch in a post-call stupor, I booked an impromptu trip to Chicago.  Leaving at 6 am on the first day of my vacation.

It was an amazing trip.  Chicago was a beautiful city filled with interesting places to visit and a seemingly unending list of great places to eat.  The weather was perfect.  I lucked out and got a great hotel room on the 22nd floor that looked directly towards the Chicago River and the Wrigley Building.  And for one week I didn't have to take orders or give orders or feel people's pulses slip away as I held my hand over their femoral arteries.  It was the perfect escape. 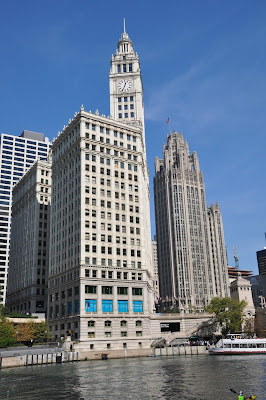 I had hoped that my trip to Chicago this past weekend would be just as amazing.  And I will say that it was mostly fun, lest I seem ungrateful for having the good fortune to be able to travel to such a remarkable place.  I got to show my Mom a city that I love; I got to meet Carlos from Top Chef season 11 and eat in his amazing restaurant; and I left the pressures of work behind for four days.

My family is not always easy.  My Mom is going through a difficult period, still struggling to cope with the death of my father six years ago, and there was understandably a lot of time and attention devoted to what she's going through.  She also snores.  Loudly.  And unpredictably.  I spent the first night on the couch to get away from her, and the second night I severely pissed her off by making her sleep in my brother's room.  Thankfully he is so perpetually exhausted that he can sleep through anything.

And then there's my brother.  While I love him (really...I love him), he and I see the world through very different lenses***.  I am an unapologetically left-wing, environmentally minded, socialistic granola cruncher.  My brother takes ten napkins at Chipotle and throws out nine unused ones.  If we could simply agree to disagree, we would probably get along much better; however, we both think that we have all the answers to the world's problems, and we are determined to share them with each other.  So there was some conflict.  He said I was judgemental.  I may have called him an asshole.

The good thing about family is that they are always your family.  Even if you call them an asshole.

*The resident contract in my province stipulates that residents cannot take call more than once every four days, on average; however, in situations where "patient care would otherwise be compromised", that rule can be overlooked.  Hence the one-in-three call.

**I refuse to believe that this reflects on my skill as a physician in any way.  The patients were simply that sick.  Most of them didn't make it to the end of the code blue.

***Thankfully he isn't a Trump supporter.  There are some things that I cannot forgive, even when it's family.
Posted by Solitary Diner (Also Known as The Frugalish Physician) at 9:55 AM

Email ThisBlogThis!Share to TwitterShare to FacebookShare to Pinterest
Labels: Chicago, Family, Getting on my Soapbox, Vacation