(This is going to be really quick, as I need to leave for dinner with friends in 20 minutes.  Yay friends!  And dinner!)

All of my shoes decided to die simultaneously*, so over the past few weeks I have slowly been replacing them.  I have been doing it very slowly, because the idea of spending hundreds and hundreds of dollars at once, even if it is very necessary, makes my stomach turn.  My first purchase was a pair of work shoes, as my old shoes had passed the point of being acceptable months ago, and my second was a pair of hiking shoes.

I must have been tired when I bought the hiking shoes, because I clearly didn't spend enough time choosing them.  I tried on 3 or 4 different pairs, settled on the pair that felt best, and then walked around the store for a few minutes.  They felt generally okay, although not as comfortable as my seven-year-old pair, and I figured they would feel increasingly good the more I wore them.

The worst part was, in a fit of minimalism, I had thrown out the receipt and the insoles (I wear orthotics**), so I couldn't even take them back.  Which left me with the choice of a) wearing the bloody things for years until they wore out or b) getting rid of them and spending another $200 on a new pair of shoes.  For days I was tormented by the shoes, because I didn't want to continue being uncomfortable, but I also really really really hate wasting money.

Last night, I gave in and started looking on Mountain Equipment Co-op's website for other shoes.  I was done with sore feet, and I was going to just suck it up and buy new shoes.  But first, I decided to see what people who had bought my shoes had to say.  And found this: 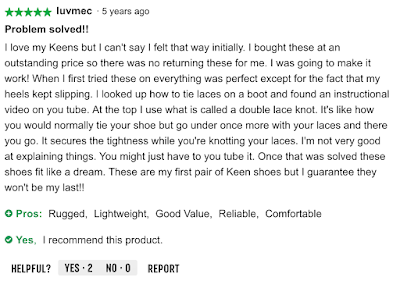 OMG...that was me!  Someone whose heels keep slipping!  So I went on YouTube.  And found this video about how to tie shoes:


It has completely changed my feelings about the shoes.  I decided to try tying one of my shoes this way to see if it would help, and by the time I had walked to my car I was practically crying because I no longer despised my $200 shoes.  They fit!  From top to bottom!  And my heels don't slip anymore.

Moral of the story:  The internet is amazing.  And one should never throw out $200 pairs of shoes***.

*This may have something to do with the fact that I hate spending money and shopping, so I put things off until the absolute last minute.  Like the zero-tread-left, ice-water-leaking-in-through-holes last minute.

**I am a good, book-loving, nerdy queer woman.  Who wears orthotics.

***I would not have thrown them out.  I would have re-homed them.

****I will not spend $200 on dinner.  I like eating out, but not that much.
Posted by Solitary Diner (Also Known as The Frugalish Physician) at 7:12 PM

Email ThisBlogThis!Share to TwitterShare to FacebookShare to Pinterest
Labels: Frugality Gone Wrong, My Resistance to Spending Money, NaBloPoMo, Shoes, The Internet is Awesome